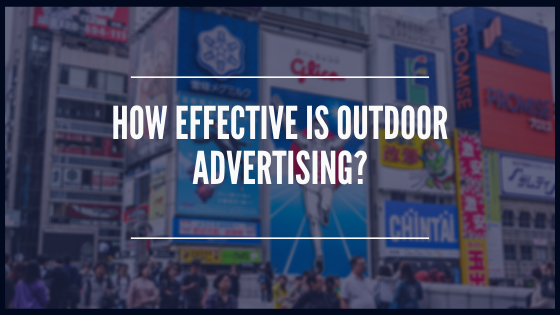 How Effective Is Outdoor Advertising?

The first record of a billboard being rented was all the way back in 1867, and by 1870 the United States was home to 300 sign-painting companies keen to cash in on the new billboard industry.

The introduction of a standard billboard size in 1900 meant that big advertisers like Kellogg’s and Coca Cola were able to start advertising nationwide. With the arrival of mass-produced, affordable cars in the 1920s, the focus shifted, and roadsides became a popular location for billboards.

Digital billboards were launched in the early 2000s and have continued to grow rapidly ever since. Instead of manually switching artwork, digital displays offer the opportunity to change ad copy within seconds. In 2003, digital displays made up only two percent of the outdoor advertising market, by 2010 it had grown to more than 10 percent, and now accounts for an even higher percentage.

Over time, the industry has expanded to include a large and varied range of different outdoor advertising formats. As advertising space became available in newer locations such as subways, bus stops, and airports as well as many other new non-outdoor locations, the name ‘out-of-home advertising’ (OOH) has become more widely used.

Out-of-home advertising is an effective way to market. However, it’s important to identify your goals to determine if it’s a good fit for your company and to keep a few things in mind when creating your out-of-home campaign.

Establishing your advertising goals at the start of the project will ensure that all other efforts remain focused on achieving those objectives. Since OOH advertising is a mass-market medium, just like broadcast television and radio, it’s best used for broad messages, branding, and support campaigns. If you’re looking to tie leads and sales dollars to a billboard campaign, you’re going to be disappointed in the results.

You generally need more than one billboard to succeed with any campaign and widespread deployment across a well-chosen market to get you the sort of exposure you desire. This is where an agency can help you figure out the right placement.

Every billboard has a rating, called Gross Ratings Points (GRP), based on traffic, visibility, location, size and so on. This rating gives you a showing score between 1 and 100. If it’s 50, it means that at least 50 percent of the population in the area would see one of your boards at least once a day. If you have only one board, your impact chances are obviously less than if you have four or five.

It makes sense that the higher the GRP, the more expensive the billboard will be. A good agency can help you find the right balance of ad spend and GRP, factoring for:

Cost: Know how much you can afford and have a realistic idea of the market’s costs.

Traffic: What type of exposure to does this billboard get? Buying a cheap board on a deserted road may save you money but you won’t get the return on investment you’re looking for.

Competition: What else do you see in the area? You want your billboard to stand out from the rest.

Targeting: Find Who You Want to Reach Based on Who Wants Your Product

You need to know who your target audience is, then find out where they live. That means doing the market research, which is one way an agency can ensure you reach consumers that could become your future customers. It’s not just about the right town. It’s also the right neighborhood. Come up with a demographic profile of your target customer and find the billboards near them with the best visibility.

You can target people using a range of different factors, including:

To bolster your targeting also ask yourself:

Are you going to run traditional or digital campaigns? Do the messages coordinate and reinforce each other? Using an out-of-home campaign to support concurrent advertising campaigns can increase the success of the whole package.

Are you targeting potential customers in their communities as well as on the roads they drive to work, play, and shop? Seeing your message more than once and in multiple locations makes it more memorable, which allows your campaign to run more efficiently and cost-effectively.

Eyes are down, not up, for much of our lives. In order to have the impact you’re hoping for, the creative for your OOH media needs to follow a few simple rules.

The number one thing to keep in mind when imagining your super-effective, memorable outdoor advertising campaign is to understand how people will interact with your billboard.

The majority of billboards are along roadways. With people literally speeding past them. Billboard creative should be snappy and get its point across quickly. You want your message to be clear and immediately recognizable.

Use the answer to those questions to find the story for your message. For example:

Six seconds is the industry average for reading a billboard. So six words is more than enough text. Make sure those words are printed in a clean, bold font to ensure the best readability. Think simple, but smart. If you have a complex brand, product, or service, billboards may not be the right option for you.

Show is better than Tell.

Some of the best billboards get their message across with a striking image that pops. Bright colors and bold images attract eyes to your ad. Contrasting colors create an even bigger impact. Just remember – less is more. One amazing image will create a more lasting impact than a handful of images that make your billboard cluttered and confusing.

Be wary of logo size.

How many times has client feedback been “make the logo bigger”? It’s easy to understand why a company would want to see their logo larger than life, however, too large and it distracts from the message of the billboard and eats up valuable real estate. Too small and you present a memorable image that does not connect to your brand.

Do the arm’s length test.

Once you’ve got your masterpiece designed, ask yourself – “Will it be seen, read, and understood?” Here’s an easy way to find out. Print your billboard the size of a business card (2” x 3.5”) and hold it out at arm’s length. Does it still get your message across in roughly 6-10 seconds? If not, take the time to refine it.

If you have another media campaign running at the same time, such as TV or digital, you want the creative to be similar to assist with branding. Don’t throw different messages at potential customers – that will only confuse them.

Tell them what to do.

Be sure to include a Call To Action somewhere, whether it’s your phone number,  your website of a command (“eat here”).

Outdoor advertising is all about the long game. If you expect your board to provide overnight success, well, you’re going to feel disappointed. Billboards build recognition over time. This is one reason you should deploy more than one of them. It may take weeks for your messaging to sink in, but once it does, it’s pretty effective.

Out of home not only delivers an impressive return on investment, with an average $5.97 spent on product sales for every dollar, but it also boosts results for campaigns run in conjunction, such as digital, print, or broadcast. And 75 percent of travelers say they’ve seen billboards, so clearly they draw eyeballs.

But you have to be willing to wait for it. Don’t treat outdoor advertising like a digital advertising campaign. It’s traditional media, and a lot of your return will come through branding and recognition. Knowing how to measure your campaign, based on those two factors, is a key piece of your success.

As tempting as it might be to jump into the OOH market, working with a seasoned advertising agency will help you[/text]