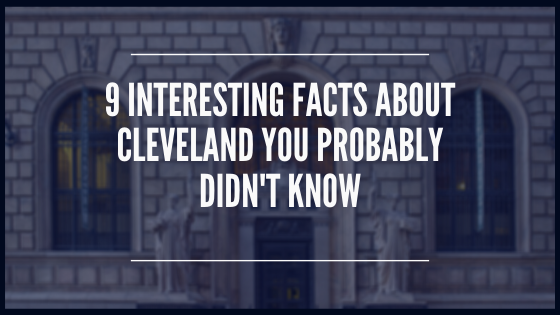 The Rock n’ Roll Hall of Fame, the
Cuyahoga River catching on fire, a cursed sports town, these are just a few of
the things that Cleveland is known for around the country.  While Cleveland isn’t the most glamorous city
in America, there are some pretty interesting things about our city that makes
it great.  Although useless, enjoy some
of these interesting facts and tid bits about Cleveland history that you
probably didn’t know.

1. Cleveland was in fact the first city to be lit by electricity

Electricity is widely thought to be invented or discovered by Benjamin Franklin, but it was Charles Brush of Cleveland who put it to it’s greatest use.  In 1879, Brush illuminated Public Square to be the first “city” lit with electricity.  Additionally, the first electric traffic signal was in the intersection of Euclid Ave. and East 105th St.

2. The first “semi-truck” was invented in Cleveland

Back in
the 1800’s, when automobiles were first being rolled out, there were no big
trucks capable of transporting large quantities of goods.  Alexander Winton was a Scottish immigrant who
moved to Cleveland in the late 1800’s.
There, he founded the Winton Bicycle Company in 1891.  That company turned into an automobile
company, and when Winton realized he needed a way to transport automobiles, he
attached a large wagon/cart to the back of his car and the first semi truck was
born.

3. The name “Cleveland” is the way it is because of a newspaper

Cleveland
was originally named “Cleaveland” after Moses Cleavelend founded the city in
1796.  It was called Cleaveland until
1830 when The Cleaveland Leader, a newspaper in town, couldn’t fit the extra
“a” on the front cover, and just decided to scrap it and go with Cleveland.  The name stuck, and that’s why it’s called
Cleveland after all these years.

4. The first “indoor shopping mall” was in downtown Cleveland

The Arcade
downtown opened in 1890 as America’s first indoor shopping mall.  The mall was modeled after a similar gallery
in Milan, Italy.  Some of the richest men
in America at the time happened to reside in Cleveland and they funded the
construction of it.  These men were Louis
Severence, John D. Rockefeller, Charles Brush and Marcus Hanna, some extremely
famous wealthy Ohioans.

5. Golf was revolutionized in Cleveland

The game
of golf today wouldn’t be where it is without the ingenuity of Coburn Haskell,
who modernized the golf ball itself which helped grow the popularity of the
sport.  Haskell was a golfer himself, who
designed a new ball that featured rubber thread wrapped around a rubber core
which helps the ball travel further distances and easier control.

6. The first rock concert was held in Cleveland

Cleveland
has the Rock n’ Roll Hall of Fame for a reason, as the first ever rock concert
was held in 1952 at the Cleveland Arena.
Featuring acts such as Paul Williams and the Hucklebuckers, and Tony
Grimes and the Rockin’ Highlanders, you could watch the first ever rock concert
for a mere $1.50 entry fee.  Alan Freed,
commonly known as the person who coined the term Rock n’ Roll, was there and
broadcasted the show over the radio.

7. The first mass produced potato chips were from Cleveland

During the
Civil War in 1862, citizens had to go to the post office to retrieve their
mail. Since so many people were expecting mail from their loved ones partaking
in the war, there were endless lines and wait times for people to get their
mail.  Joseph Briggs, a postal worker at
the time, suggested the idea of delivering pieces of mail to people’s houses as
opposed to them going to the cities post office.  It caught on and today that is why we get
mail delivered daily to our mailboxes.

8. The first mass produced potato chips were from Cleveland

While
potato chips were around and eaten well before William Tappenden mass produced
them, they were only available in certain restaurants as something people
ordered.  Tappenden wanted them to be
available everywhere, and in 1895 he began making them in his barn and
delivering them to grocery stores with his horse and buggy.  The first potato chip factory was then built
on E 79th Street in Cleveland.

9. Ohio is the only state with an official rock song

You
definitely know the tune, the famous “Hang On Sloopy” by The McCoys is played
all over the state of Ohio with it’s famous call out being the “O-H-I-O” chant
in the middle.  The song is played and
sung by Buckeyes fans around the world every football season.  The McCoys were originally from Dayton,
Ohio.